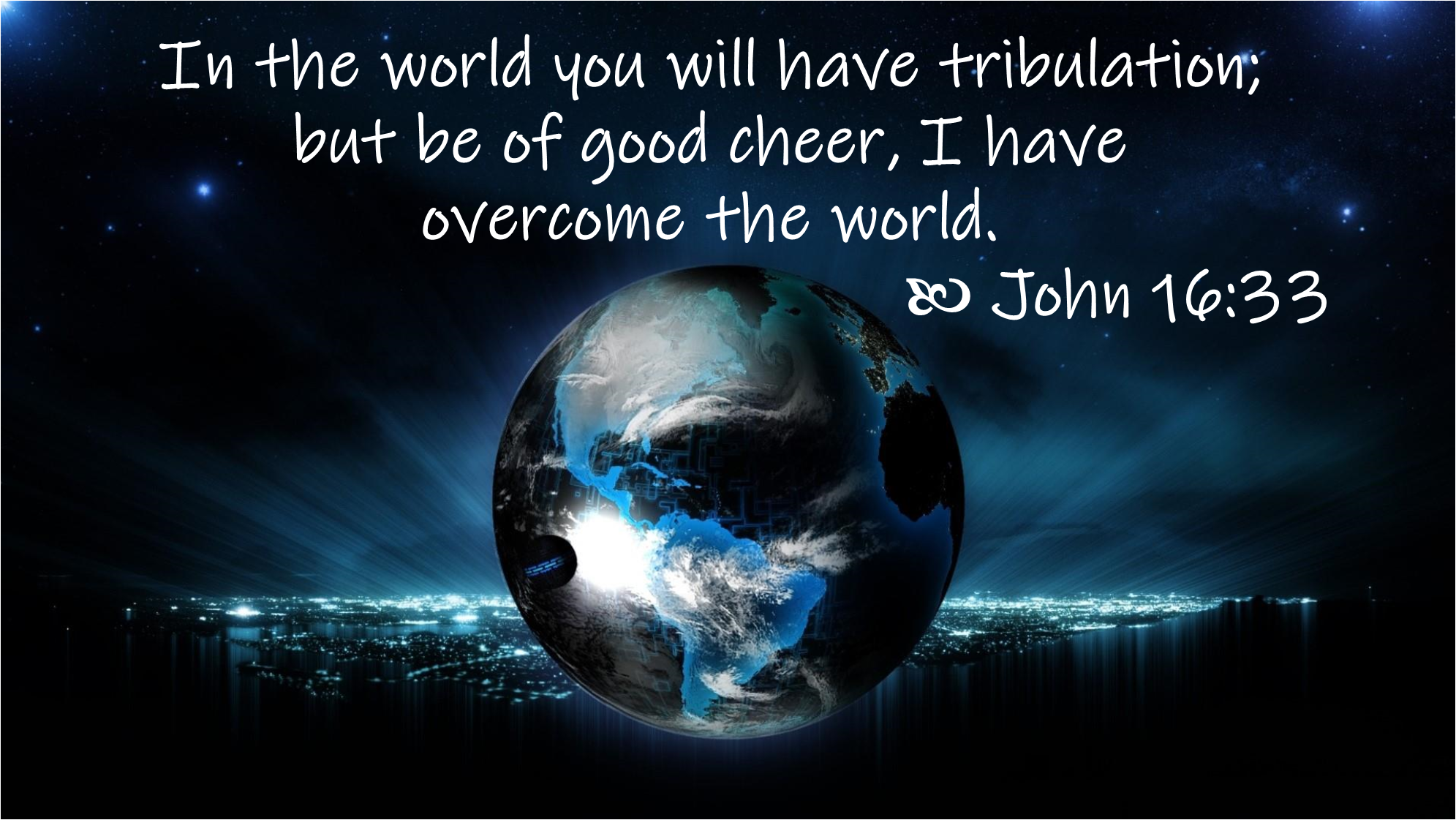 When God first created the earth and placed Adam and Eve in the Garden of Eden, the world was a perfect place. But the moment Eve sinned, the world became a broken place and has, over time, become more and more broken then ever. Jesus never promised that following Him would make life easy. In fact, He told His disciples that they would have tribulation as long as they were in the world. We definitely see tribulations in our world every day, but thankfully, Jesus is our overcomer.

Jesus never promised that following Him would make life easy. In fact, He told His disciples that they would have tribulation as long as they were in the world.

If we were to define “tribulation, ” it would be “a state of great trouble or suffering. Yes, the Bible talks about the great tribulation that is associated with the rapture of all the Christians from this world, but in this verse, Jesus was telling his disciples to expect trouble – even then in their day. And let’s face it – it’s not any better today. Most of us would agree it is much worse today. If we ever needed an Overcomer to give us hope and peace in the chaos of the times, its’ now!

But what about the disciples? They all definitely experienced tribulation. While the Bible only tells how two of them died, there are reports from history and legends that tell us what happened to each one of them.

What happened to the disciples? The following disciples were crucified:

The other martyred disciples:

Only One Disciples Died a Natural Death

John is the only one believed to have died a natural death from old age – but they did try to kill him. It is believed that he was the leader of the church in Ephesus and that he took Mary, Jesus’ mother, into his home when Jesus was crucified. When Christians were being persecuted under Domitian rule, he was cast into boiling oil at Rome and survived. He was then exiled to the island of Patmos where he wrote the book of Revelation.

After Jesus death, two additional disciples are identified in the Bible. The disciples chose to replace Judas who had betrayed Jesus. Matthais became the 12 disciple. Then on the Road to Damascus, Jesus Himself confronted Saul, commissioned him and changed his name to Paul. What does history tell us about these two disciples?

The Overcomer was also a Man of Sorrows

If these disciples who followed Jesus experienced tribulation, why do people today think that the Christian life is rosy and sunshine? While Jesus walked the earth, he did not go through life as a “positive-thinker.” Isaiah 53:3 describes Him as a man of sorrows. If we read the prophecy found Isaiah 52:13-53:12 we can see how much sorrow and suffering the Messiah would endure. He suffered first by leaving the glories of heaven and entering the human race as a man. Then He suffered all the things that humanity suffers, and then finally He suffered the wrath of God as the sin-bearer. Such suffering must have been all the more acute for Him, given His perfect nature. Who of us could ever understand the depths of what His righteous spirit suffered as He lived among fallen humanity?

The Joy Set Before the Overcomer

Even though Jesus suffered greatly, He did not live with depression or go around with a long face. Hebrews 12:2 tell us He could rejoice in His sufferings as He focused on the final outcome. In this verse we find that Jesus is “the pioneer and perfecter of faith. For the joy set before him he endured the cross, scorning its shame, and sat down at the right hand of the throne of God.”

Just before going to the cross, Jesus and the disciples celebrated the Passover together in the upper room. There He washed the disciples feet, Jesus identified Judas as His betrayer, He broke the bread and shared the wine. But then the Bible tells us they sang a hymn of praise. Jesus knew that as they walked out of the upper room and into the garden to pray that he would be arrested and falsely tried. He knew everything He was about to endure and that He would die – and yet He could sing a hymn of praise. Why? Because He would have completed the task He came to earth to do – to bring salvation to us. He would become our overcomer.

The Simple Truth: Live is hard, but we have an Overcomer

The simple truth is that life is hard. There is no such thing as a “name it and claim” theology and anyone who preaches it, is a false teacher. Becoming a Christian doesn’t make life easy. In fact, it can make it harder. In John 15:19 Jesus warns us with the following: “If you were of the world, the world would love you as its own; but because you are not of the world, but I chose you out of the world, therefore the world hates you.” Because we live in a broken world that is ruled by sin and Satan, we can expect that life will be hard. Jesus very clearly informed us in John 16:33 that we would have tribulation in this world.

The Good News: Jesus is our Overcomer

The good news is that Jesus didn’t put the period to the sentence at that point, but follows it with the word, “but.” Yes, we will have tribulation, but Jesus said we should be of good cheer. Why? Because Jesus has overcome the world and because He is our overcomer, we can have hope. Jesus overcame the world when he defeated Satan through His sacrificial death on the cross. Because of the cross, the power of sin has been defeated and eternal life is available to all who believe in Him. Because Jesus is the overcomer, we have the opportunity to accept the gift of eternal life that He offers to every person. We just have to accept it by faith. Then He becomes our overcomer.

Jesus said we would have tribulation in this world. Thankfully, He didn’t put the period there, but follows it with “but.” We will have tribulation, but we should be of good cheer because He overcame the world & because He did, we have hope.

Finding Peace in Tribulations because we have an Overcomer

As a Christian, death does not get the final say. The world does not get the final say. No matter what we face in this life, it is temporary and when we step from this life into eternal life, all that was suffered here will be no more. It isn’t that we won’t have troubles in this life, but that we can have peace in the trouble as we go through them in the strength of God because of what Jesus did to make our eternal life secure. In John 16:20 Jesus said, “Most assuredly, I say to you that you will weep and lament, but the world will rejoice; and you will be sorrowful, but your sorrow will be turned into joy.” Eternal joy, as we spend eternity in the presence of our Lord and Savior who is our overcomer.

Or enter a custom amount

Your contribution is appreciated and will help us grow and expand our ministry. We are a 501(c)3 non-profit organization.

Your contribution is appreciated.

Your contribution is appreciated.

Our Verse Mapping download is FREE and includes 6 pages: 3 pages of instructions for using the template and the 2 page template, plus the cover page. If you’re looking to go deeper into God’s Word, learn more about God and develop a stronger spiritual life, Verse Mapping will help you dig into the scriptures. As you apply God’s Word to your life, you will develop a more intimate knowledge and relationship with God.

We’ve put together 52 memory verses for you to hide God’s Word in your heart! You can download the full document for free and then print a new verse each week and as many copies as you’d like. Each verse prints four times on a page so that you can then cut them into index size cards and place them in prominent places where you will see them frequently throughout the day to help you remember to memorize them. Just because you visited our site, they’re yours for free! Download today.

With just 30-40 minutes per day, you can read the entire Bible in one year. The One-Year Bible Reading Plan consists of both Old Testament and New Testament readings for each day of the year. The Bible is God’s personal Word to you. What is He saying to you today? Open your Bible and find out!

The Self-Care Wheel provides ideas for practicing self-care in six dimensions of yourself: Spiritual, Physical, Emotional, Intellectual, Sensory, and Social. NOTE: You will need 11X14 paper to print the wheel.

Want to know more about self-care? Our Self-Care blog series targets people who serve in any ministry position and takes a Biblical approach to self-care.

<<<SPOTLIGHTING>>> In the Spreadshop Store:

Are you a person who stands in prayer for others on a consistent basis? Are you a person that people come to when they need prayer? If you know what it means to be an intercessor in prayer, then you’re a prayer warrior.

The slide show below highlights some of our favorite Christian Tees designs available in our Spreadshop and Teespring stores.

Canvas art and posters are available in the Teespring store. Many of our Christian Tees are also available at Teespring.

To see the collection of Canvas and Poster Prints